How To (More Properly) Cook Bacon

There are many ways out there to cook bacon, and I’m sure a quick online search will yield an infinite number of clever recipes. Which is great and I will no doubt eventually try a number of them. I find more often than not, people think that “frying up” some bacon involves a sizzling hot skillet when in actuality it doesn’t. It usually ends up being burnt to a crisp. So, here is a standard way to cook bacon with the least amount of fuss, smoke, and char.

1. Place the bacon into a COLD skillet. Select the appropriate sized pan for the amount of bacon you want to cook. The bacon should evenly cover the entire bottom. Cut the bacon if needed so that it does not overlap or creep up the sides of the skillet.

2. Cook the bacon over a LOW heat, for a total of 10-15 minutes, depending on their thickness.  Flip them every 2-3 minutes to monitor their cooking. The biggest misconception is that you have to fry the bacon in a hot pan over a hot flame. That method cooks them too quickly, resulting in gnarled pieces of meat with burnt edges. 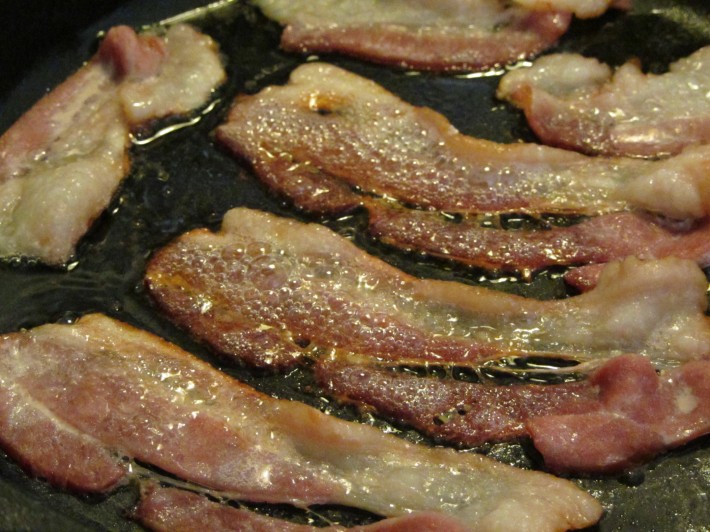 3. Once the fat on the bacon has turned translucent, and you see little bubbles start to form around the bacon, that is when you know they are done cooking. Remove them to a plate lined with a paper towel to drain off excess fat. You should now have bacon that is crisp, but with still a meaty bite.

* I like to buy thick cut bacon. It takes a little longer to cook, which reduces the chances of accidentally overcooking.

Tags: bacon, how to cook bacon