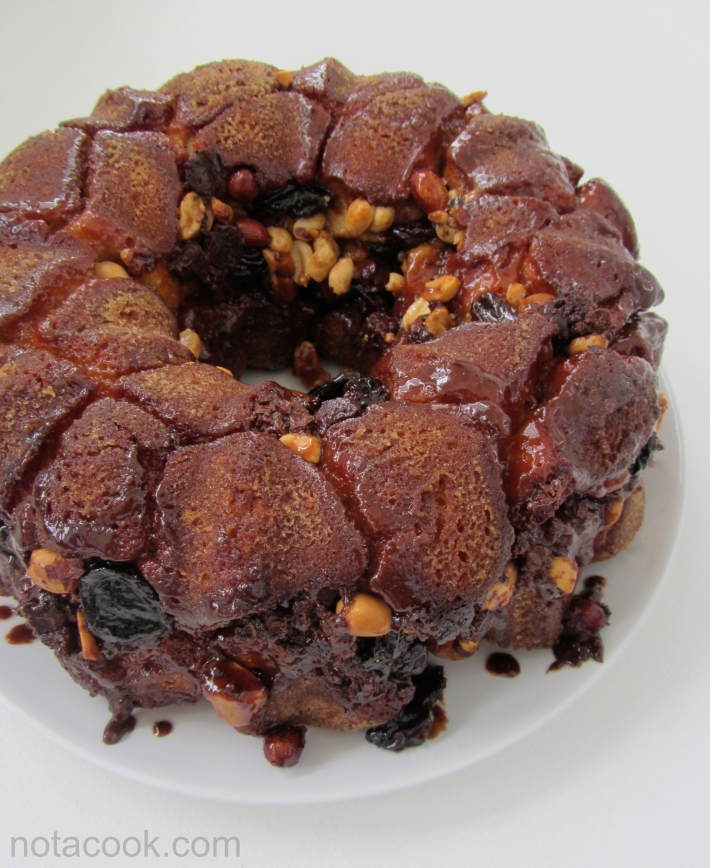 Monkey bread is an American invention that came about in the 1950’s, a response to the advent of pre-packaged foods which heralded an easier job and lifestyle for all the Sally Homemakers and Domestic Debbies of the world. The formula for this baked bread is simple: canned biscuits, butter, cinnamon, and sugar. I have seen some monkey breads with nuts and some without, though in this case I opted to throw in a large medley of nuts and raisins to at least bump this “breakfast” bread up into something we could consider to be nutritional. Either way, it’s still good and great to snack on!

1. Preheat oven to 350F. Prepare a bundt pan by greasing it with butter or shortening.
2. In a large bowl, mix together the cinnamon and sugar. In another medium bowl, toss together the mixed nuts, raisins, and chocolate chips.
3. Pop the biscuits out of the cans. Separate them and cut into quarters. Gently toss them in the large bowl of cinnamon and sugar until all the biscuits are evenly coated with the sugar mix.
4. Build the bread: Place a third of the coated biscuits in a single layer into the bundt pan, then sprinkle half of the nut mixture into the pan. Repeat and build another layer of biscuits and nut mix, then top off with the remaining biscuits.
5. Melt the butter, brown sugar, and vanilla extract together, stir until uniformly combined. Pour over the biscuits.
6. Bake on the center rack at 350F for 30 minutes, or until the bread had risen and turned brown, and a knife inserted into the center comes out clean.
7. Cool slightly (until bread has stopped bubbling), then invert out onto a serving plate. Best served right away while still warm.
8. Wasn’t that easy? Now go eat!